Lolo August with lola, me , my brother and sisters, and my cousin in December 2006

This blog is about my grandfather, who passed away a few years ago. His name was August Feria. He was my favorite grandfather because we always played chess in the afternoon. He died from pneumonia when I was 9 years old. It was a sad day for me and for my dad. I know because I saw that his face was really sad :(.

It was Aug. 30, 2011. We were going to see Lolo Vic, Lolo August’s favorite brother. He came home from Chicago last week to attend a reunion of the Alpha Phi Omega Fraternity, which he and Lolo August founded. Lolo Vic has  curly hair and looks a lot like Lolo August but younger.

We were getting ready for the lunch gathering that my father planned. When the taxi arrived, my uncle, aunt, mom, my 2 sisters and my brother hopped into the taxi and headed to Pancake House while my Papa, my sister and I walked the short distance from our house . We made a quick stop at the basement of Saint Peter’s church beside Pancake House, where my Lolo August was laid to rest.

Lolo Vic, mom, my 2 uncles , my 2 aunts, 3 cousins, my grand mother, my 2 sisters and my brother were at Pancake House when we arrived.

We first looked at the  menu for kids, where there were about  10 to 16 dishes. My baby sister, Happy, and my younger brother, Oz,  ordered   Mac & Cheese, which they both loved. Who doesn’t ?

My sister, Zia ordered Corn dogs, which only included three cocktail hotdogs and some fries, and which mom said was too little for a lunch meal, so she gave Zia some Mac and Cheese from Happy’s plate. And oh, there’s Spam and Egg , which both my mom and my aunt laughed at when they saw it.

Me, my cousins, my siblings and Lolo Vic in front of Pancake House

My sister and I did not want anything from  the Kids Menu. My sister ordered Maple Chicken and Crispy Waffle.  I ordered   medium rare T-Bone steak with potato wedges, that Pancake House promises to be ” reminiscent of family backyard barbecues”.  Mom ordered Roast Beef while Papa ordered sirloin steak.

My sister  said that the chicken was too sweet, but the vegetables were crunchy and fresh.  The dressing was a good combination for the vegetables. The potato crumbs and  the waffle were both delightfully crunchy. The plating was appetizing because it used a large plate and the food filled it all up. My mom told my sister that the skin was probably sweet because it’s supposed to be eaten with the waffles. But my sister saved the waffles for dessert.

The steak I ordered cost P485. For me, it’s expensive because other steaks I have eaten costs less than P400 and are even better. There are about 3 or 4  kinds of steaks on the menu – Sunrise steak, Tenderloin steak, Sirloin steak and T-Bone steak.

I ordered steak because I wanted to try all the different kinds of steaks. I already tried Pork Tenderloin, Pork Sirloin , beef sirloin and New York steak. I LOVE steak because it’s tasty and it’s easy to cook. 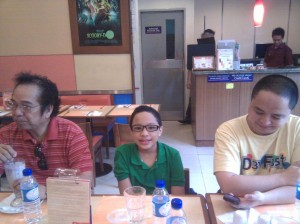 Papa and Lolo Vic beside me

I waited for 10 minutes for my order to be served. While I was waiting, I inspected the Inspector Gadget and Scooby doo  posters   that hung on the wall. I also listened to the sizzling sounds in the kitchen while I sat between my father and my Lolo Vic, who chatted over my head.

When the steak was served, I first looked at the plating.

My first glance did not serve to whet my appetite, since there seemed to be too little food on the plate. I was thinking of asking the waiter to tell the chef to make me another steak , but that would be too expensive.

All I know about plating food were: always keep the plate clean, be creative at your plating, and always have space for the food on the plate . Yup, there was a lot of space alright!

When I sliced through the steak, I realized it was well done not  medium rare, as I ordered.  The steak was chewy and pretty plain .  The potato wedges were ordinary — I like our homemade potato wedges better   because our potato wedges pack more zest. It took me for about 5-10 min. to finish the whole dish.   It wasn’t   enough for me at all, so I started to look into desserts, as Papa suggested.

My waffle fold over

No more waffle fold over

I raised my hand and said, “I do”. I ordered Waffle fold over. Unlike my steak, the waffle fold over was more than enough for me. It includes a 6-inch waffle, 2 scoops of vanilla ice cream, peanut butter spread, nips and chocolate syrup on top.

The plating was interesting, and  it’s not   messy at all, not even fingerprints to be found.

I thought I wouldn’t be able to finish it, but I did.

Tito Noel ordered a drink that had an ice cream on top of what I thought might be Coke or iced tea. I didn’t know what it   because it’s my first time to see such–it was  Root beer float.

The Waffle fold over was too sweet for me, but for those who like sweets, this is the one   for you.  I was really full after I ate the dessert.

The restaurant is clean and the air is cold. The toilets are clean but the sink is clogged .

This day made me happier and remember Lolo August. Having Lolo August in that party would have been much better. He probably would have ordered salad or sandwiches because he loves healthy food.

I learned a lot from Lolo August. He always tells me to be safe when going up and down the stairs. He showed me some strategies in chess. He told me we could make a restaurant but he died before we could. That’s why I keep cooking and reading and watching more about cooking so I can accomplish our dreams. I will never forget Lolo because he’s a good man and he tells me what I need to know, like what’s right and wrong about cooking and about life.